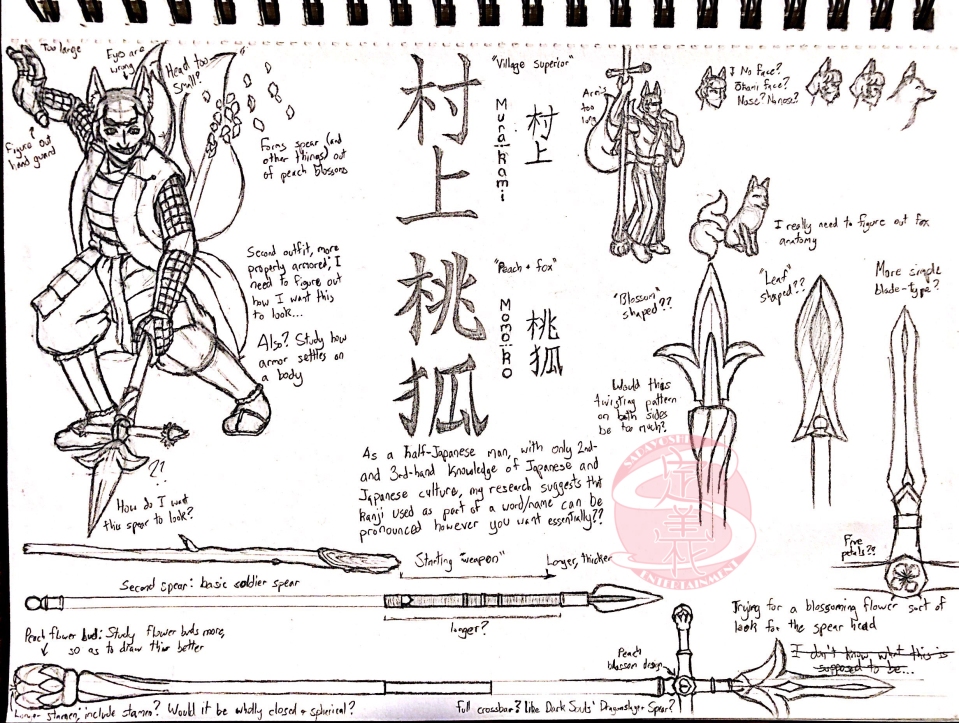 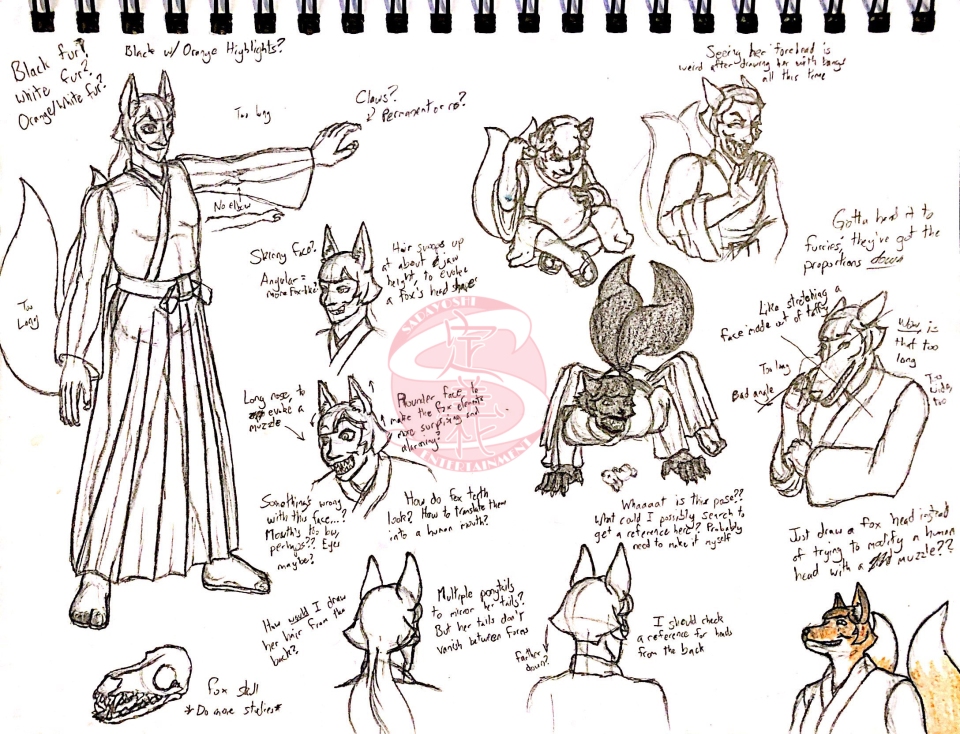 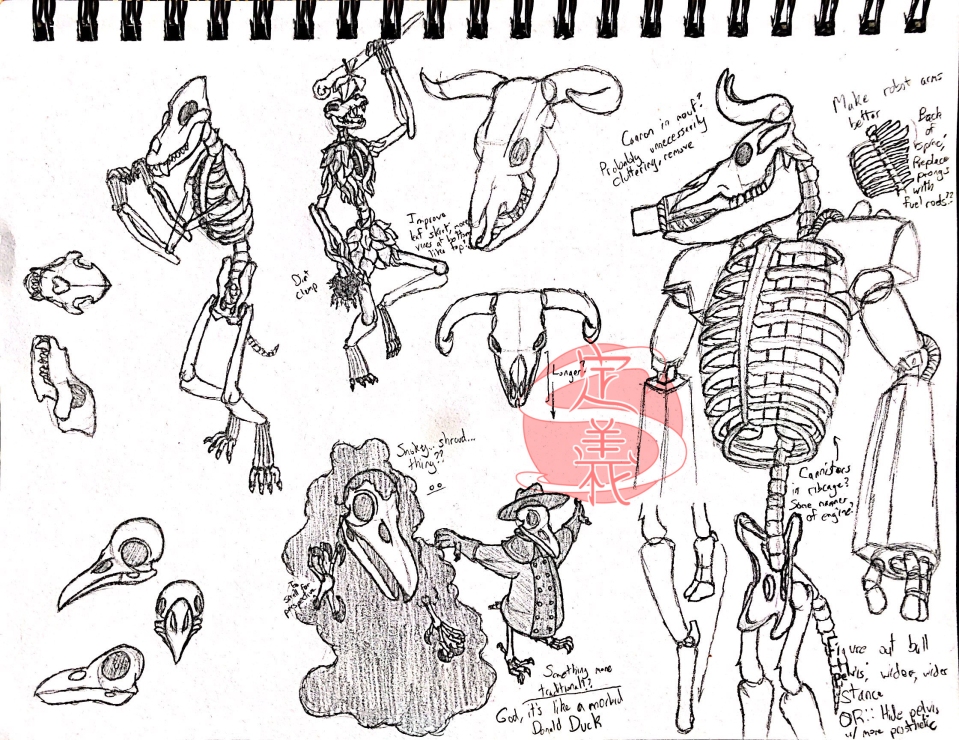 So here’s the notes I scribbled out for the next piece of the overworld hub. The Shop/Workshop handles your inventory and the abilities of the other overworld facilities.

The stock of the Shop portion is dynamic and directly reflects the item drops of the region and sub-region that you were on before leaving the dungeon. While not unlimited, this allows players the chance to just purchase the items and materials they were looking for, if RNG was not kind.

The player can also upgrade both the facilities and their inventory. This includes:

In terms of crafting, you create and enhance equipment in the shop while you create restorative items over at the tree. The equipment you can make here provide a variety of enhancements to your units, such as increasing stats and adding passive traits. 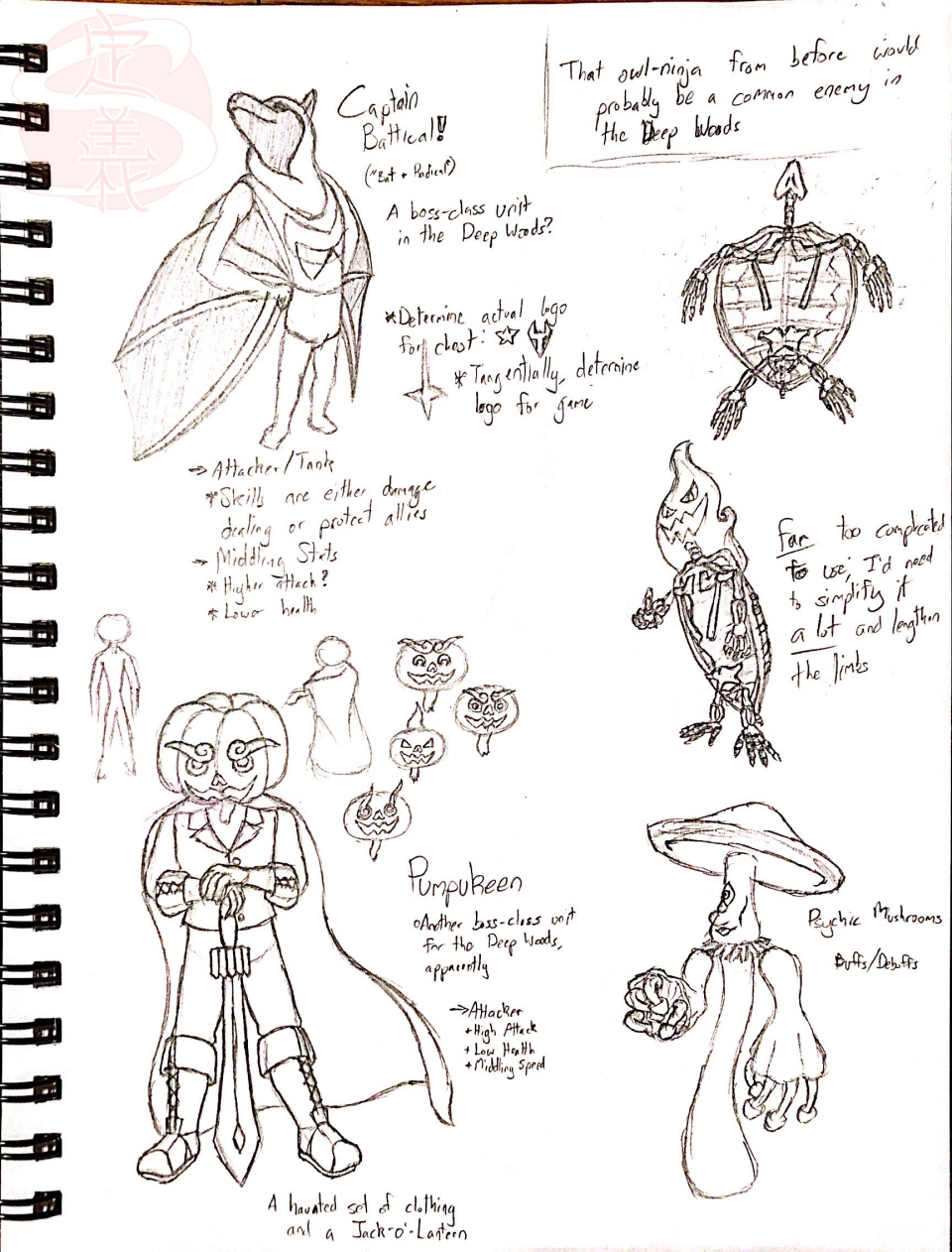 I’ve drawn some SPOOP units for the Deep Woods in Starfall Dungeon. The two common units are a set of psychic mushrooms and apparently a turtle skeleton. The turtle skeleton definitely needs work to be viable as a unit; it’s too complicated and the limbs need to be changed.

Captain Battical!, a superhero-themed bat. A defender of Justice and Innocents, he uses his powers to shield other units from attacks while dealing out attacks of his own. He’s a real radical dude or whatever.

Pumpukeen is a haunted set of clothes and a Jack-o’-Lantern. Lost souls trapped in the Deep Woods ultimately join the collection of souls that compose Pumpukeen. They wander endlessly in the dark, providing a light to lead whoever they find to safer parts of the Forest region. As a unit, Pumpukeen has numerous sword strikes that target multiple enemies, pierce defenses, and inflict burning.

Marie Anette is a possessed marionette. A right classy puppet, dancing on strings that extend infinitely into the sky.

She’s not much of an attacker; her main attack involves floating over to a target and spinning her legs at them. Her primary role involves using her strings to delay enemies and puppeteer allied units to effectively use their skills on her turn. And maybe revive fallen units? Or would that be unbalanced?

She’d probably appear as a boss in the City region, continually summoning reinforcements that you’ll have to get through. 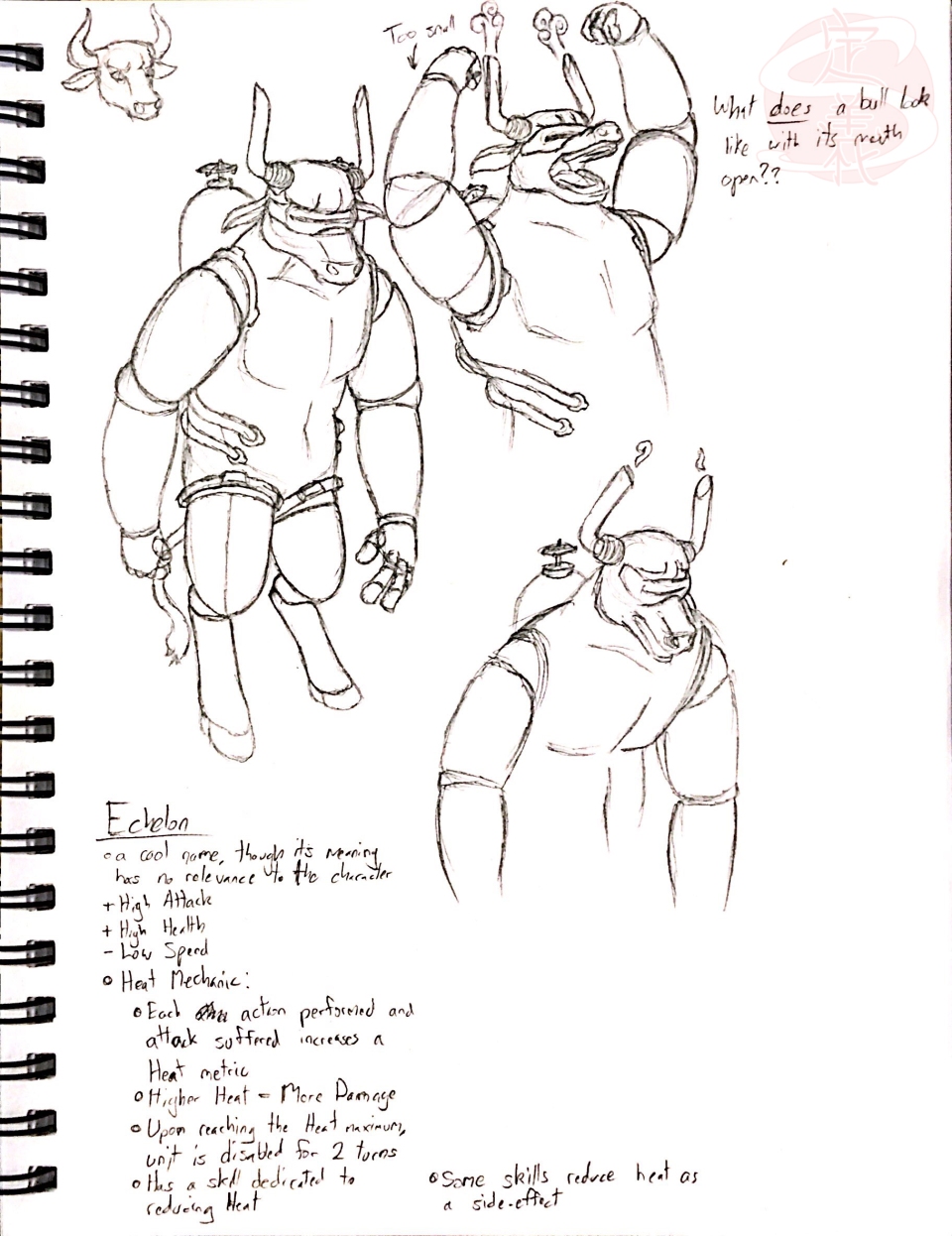 Echelon is probably a Boss-class unit for the Industrial region. Him’s a steam-powered, cyborg Minotaur.

He’s the first to have the unique Heat mechanic: every action performed and every attack suffered increase a Heat metric. This metric is directly tied to Echelon’s damage output, growing as more Heat is generated. But, when the Heat exceeds its maximum value, he is disabled for a number of turns. Additionally, he has a skill that specifically reduces Heat, as well as some attacks that have Heat reduction as a side-effect. 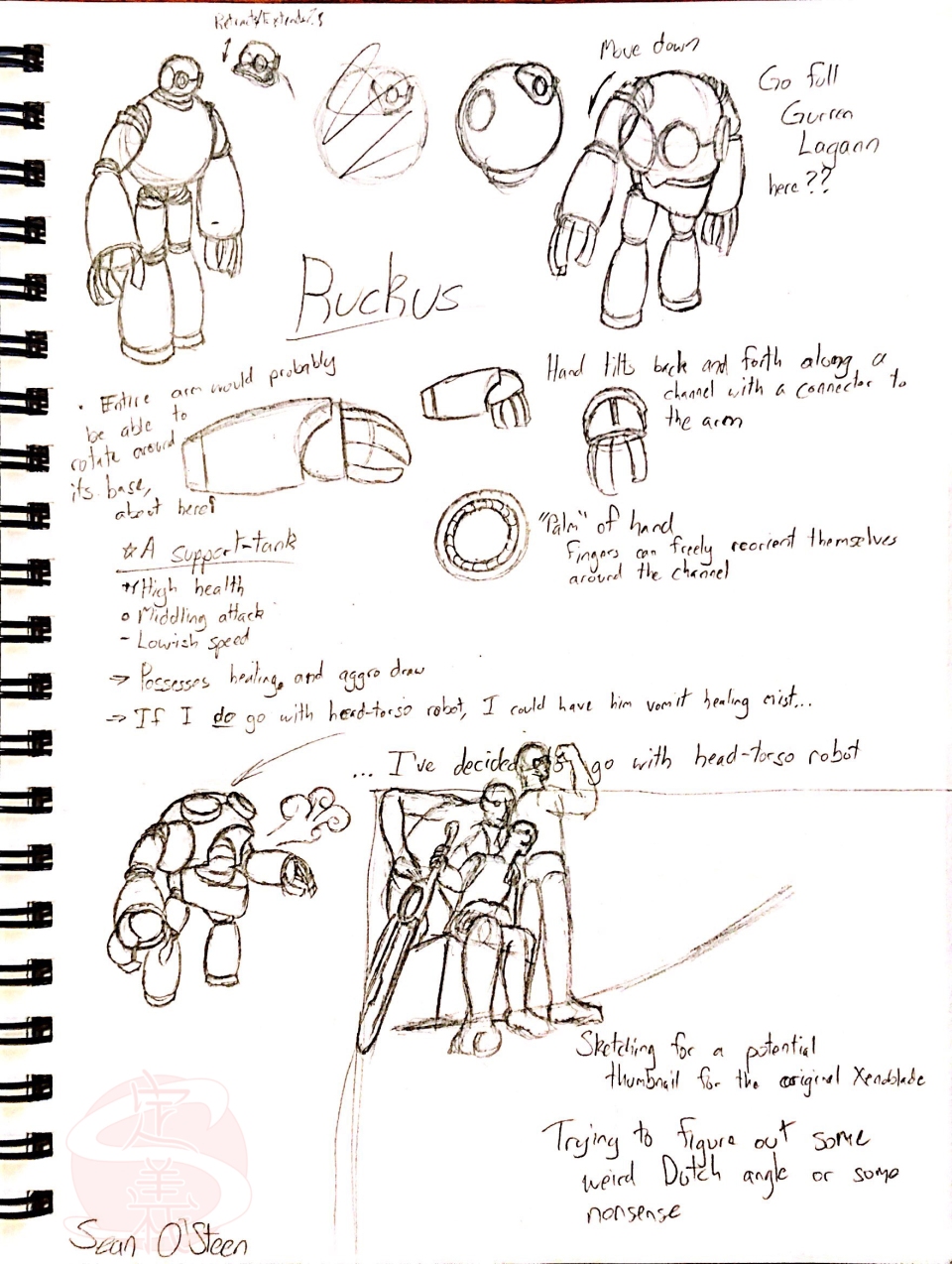 I’m bringing back an old robot fella as a unit for Starfall. He started out as a ball which all his bits could fold back into, but I felt like sprucing him up a bit to give him a bit more flair.

So I turned him into a giant head. That pukes healing mist.

At the bottom there is some meager sketching for some Xenoblade art that I really need to buckle down on. I have no idea what I was really doing there…

As a counterpoint to a Lang-caste Nasonovian, a Stroth is an enormous powerhouse, built more for crushing than for precision. Standing heads above even the Hornet, very few Nasonovians take the steps to become a Stroth.

Squads in the military typically feature one Stroth per five Lang soldiers. Stroths utilize the heavy armaments a Lang can’t utilize easily: anti-vehicle, armor crushing and piercing, and bunker busters are among these. While a number of crushing weapons feature beam weaponry, their primary function is smashing things with their bulk.

Largo is the most immediate subordinate to Bass Hornet. Quiet and reserved, she holds a seat in the parliament and serves steadfastly at her Hornet’s side in battle.

As a unit in Starfall Dungeon, she has a single damage dealing attack with the rest of her utility being healing and drawing aggro from enemies.